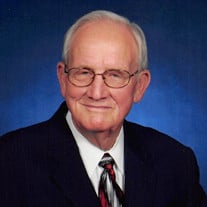 Alford D. Elmore, Sr., 82, husband of Naomi Jones Deas Elmore, died Monday, June 12, 2017, at Kershaw Health in Camden. Born January 30, 1935, in Lee County, he was a son of the late Claude Olin Elmore and the late Catherine Barnes Elmore. He was a retired farmer in Lee County for 30 years and served on the SC Forestry Commission Board for over 25 years. He served in the U.S. Army National Guard and was a member of the American Legion Post 140 in Lynchburg. Mr. Elmore served as Lee County Coroner for 20 years and as Deputy Coroner for 5 years. He was a co-owner of Hancock-Elmore-Hill Funeral Home and a member of Elliott Baptist Church. Survivors include his wife; two step-sons, Randy Wayne Deas (Marlene) and Mike Deas (Donna) all of Camden; eight grandchildren; nine great-grandchildren; and a sister, Linda E. Nesbitt of Bishopville. He was preceded in death by a son, Alford D. “Al” Elmore, Jr.; two brothers, Otis J. Elmore and Ronnie O. Elmore; a step-son, Mark Deas; and a step-granddaughter, Shanna Marie Deas. Funeral services will be held at 4 P.M. Thursday in the Hancock-Elmore-Hill Funeral Home chapel with the Rev. Will Cline officiating. Burial will be in the Mizpah Baptist Church cemetery. Pallbearers will be Ken Nesbitt, Larry Logan, Jason Deas, Ernie Wright, Russ Elmore, and Chad Beasley. The family will receive friends from 5 to 7 P.M. Wednesday at Hancock-Elmore-Hill Funeral Home and other times at the home. Memorials may be made to Mizpah Baptist Church Building Fund, 3659 Jamestown Rd., Camden, SC 29020 or to Elliott Baptist Church, P.O. Box 117, Elliott, SC 29046. Elmore-Cannon-Stephens Funeral Home and Crematorium of Sumter and Hancock-Elmore-Hill Funeral Home of Bishopville are in charge of the arrangements.

The family of Mr. Alford D. Elmore Sr. created this Life Tributes page to make it easy to share your memories.

Send flowers to the Elmore family.