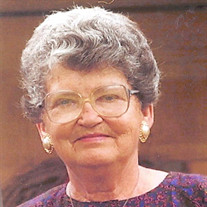 Beulah Stowers Fox, wife of the late Elmer Lee Fox, died June 23, 2018 at the McLeod Hospice House. Prior to this she lived at the Presbyterian Community. She was born in Bland County VA on August 13, 1919. The daughter of the late Clara and Wiley H. Stowers. Beulah is survived by her daughter Jerry Fox Law and husband Robert of Bishopville, SC, granddaughter Jennifer Law Dahmen and husband Will, grandson Nelson Fox Law of Wake Forest, NC, great grandchildren Nicholas Law Dahmen and Sarah Christine Dahmen, as well as many beloved cousins, nieces and nephews. Others who preceded her in death include: a son, Thomas Stowers Fox, sisters: Ruth S. Heaton, Evelyn Royer, Phyllis S. Fletcher, Barbara Stowers and brothers: William H. Stowers, Donald Stowers and James W. Stowers. Mrs. Fox was a retired teacher in Bland and Giles counties with 28 years of service, six of which were as principal of Glen Lyn Elementary School. Her teaching career started in a one room school. She was a graduate of Hiwassee College, Concord College and Masters’ Degree from Virginia Tech. She had a passion for learning, teaching, and was a charter member and president of the Giles County ADK Sorority (educational). She taught Sunday School over 50 years and was a lifelong member of several Methodist Churches. Most of her adult life was spent in Princeton, WV and Giles County, VA. In 2007 she moved to Bishopville, SC to be close to her daughter. In her retirement she was an avid quilter and writer. She wrote and published a book “With Love” using old letters written home during college, most material was devoted to the 1930’s making it a memoir of life in Virginia during the depression. A poem book “My Little Corner of the World” was published in 2017 as well as a weekly column with the same name in The Lee County Observer. The family thanks Presbyterian Communities of Florence and McLeod Hospice Home for all the care and compassion given. Visitation in Bishopville will be held on Monday June 25th between 5:00 and 7:00 p.m. at 524 W. Church Street. Funeral Services will be conducted at 11:00 a.m. on Wednesday June 27th at Memorial Funeral Home, Princeton, WV with The Reverend Dr. Thomas Conley officiating. Visitation will be one hour prior to service. Interment will be in Roselawn Memorial Park. Note: Memorials in lieu of flowers, to Bethlehem United Methodist Church, PO Box 167, Bishopville, SC 29010, Rich Creek United Methodist Church, PO Box 397, Rich Creek, VA 24147 or the charity of your choice. Hancock-Elmore-Hill Funeral Home is serving the family.

Beulah Stowers Fox, wife of the late Elmer Lee Fox, died June 23, 2018 at the McLeod Hospice House. Prior to this she lived at the Presbyterian Community. She was born in Bland County VA on August 13, 1919. The daughter of the late Clara and... View Obituary & Service Information

The family of Mrs. Beulah Stowers Fox created this Life Tributes page to make it easy to share your memories.

Send flowers to the Fox family.