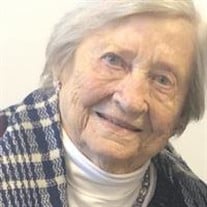 Birgit Hunaeus Darby, age 90, passed away peacefully at her home on Friday, August 27th, due to Covid related complications. Birgit was born in Copenhagen, Denmark on March 10th, 1931. She moved to America in 1951 at the age of twenty and settled down in Conway, South Carolina, working for several years as a companion to Mrs. Franklin (Iola) Burroughs. They traveled extensively together and had many grand adventures. In 1956, she met and married William (Bill) Darby of Fort Motte, SC. They started Coast Magazine and ran that publishing enterprise together for the next twenty-five years. Birgit became a naturalized citizen in 1972 and led a life of deep commitment to her adopted country and her local community. She had a hand in starting many of the service organizations that support the Grand Strand today, as well as serving on their Board of Directors, namely: The Grand Strand Humane Society, Horry County United Way, Coastal Concert Association, Horry County Shelter Home, Helping Hand, Associated Charities, Wheelwright Council for the Arts, Myrtle Beach Sister Cities Committee, and the Horry County Arts Council. She served as a member of the Myrtle Beach Planning and Zoning Commission, the Myrtle Beach Mayor's Committee for the Handicapped, Citizens Against Spousal Abuse, and as the Administrator of Elections for the City of Myrtle Beach. After decades of volunteering her talents to these numerous organizations, Ms. Darby attended the South Carolina Criminal Justice Academy at the age of 60 and became a Police Officer on the Myrtle Beach Police Force. With further training after the academy, she worked in the capacity of Detention Officer, Complaint Desk Secretary, Radio Dispatcher, and Jailer. She was much beloved by her fellow officers and also was instrumental in starting the local chapter of The Fraternal Order of Police. Throughout her years living here in South Carolina she has received many honors and awards in recognition of her contributions: - Recipient of the Wheelwright Council of the Arts Service Award - Best Volunteer Award - Operation Butterfly - Chabad Academy - Honored by The Grand Strand Humane Society for decades of Dedicated Service - Award for Outstanding Service and Dedication during Hurricane Hugo Recovery - City of Myrtle Beach - Horry Cultural Arts Council Certificate of Recognition - Top Dog Award - Grand Strand Humane Society - Volunteer Award - Myrtle Beach Police Department - Working Woman of the Week - Myrtle Beach BPW Association - Coastal Council for Internationals -The Interpreters Club of Myrtle Beach - Ambassador at MYR airport as the first point of contact for arriving visitors. - American Red Cross Certificate for Service in Response to 9/11 in New York City. She traveled to New York and volunteered with the Red Cross for over a month after the attacks. - Volunteer of the Year by the MB Hospitality Association for organizing free vacations to Myrtle Beach for NYC Firemen and Police Officers who responded to the 9/11 attacks at the World Trade Center. She most recently was honored with a Proclamation on the Occasion of Her 90th Birthday by the City of Myrtle Beach proclaiming her to be one of the city's most active and civic-minded citizens who willingly contributed her time and talents to the betterment of Myrtle Beach. Ms. Darby is survived by her two daughters, Greta Darby McDaniel (Rae) of Bishopville, SC; and Birgit Elizabeth Darby of Myrtle Beach, SC; four grandchildren, Elizabeth McDaniel Jones (Brad) of Pensacola, FL; Eleanor McDaniel Reburn (Ryan) of Salt Lake City, UT; Emmy McDaniel of Chicago, IL; and Lochlainn Burke of New York City, NY; one great-grandchild: Hayes Reburn; her beloved dog, Fernie, and her cat Thea. Due to the increased spread of Covid, the family has chosen not to hold a service at this time. Donations in lieu of flowers can be made in her name to the Grand Strand Humane Society in Myrtle Beach.

Birgit Hunaeus Darby, age 90, passed away peacefully at her home on Friday, August 27th, due to Covid related complications. Birgit was born in Copenhagen, Denmark on March 10th, 1931. She moved to America in 1951 at the age of twenty and settled... View Obituary & Service Information

The family of Mrs. Birgit Hunaeus Darby created this Life Tributes page to make it easy to share your memories.

Birgit Hunaeus Darby, age 90, passed away peacefully at her home...

Send flowers to the Darby family.