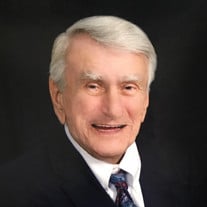 Funeral services for Carl Edward Watts, Sr., 82, who died peacefully on Thursday, August 11, 2016, will be held at 3 o'clock on Sunday, August 14, 2016 in The Chapel of Hancock-Elmore-Hill Funeral Home. The Revs. Homer Hinson, Dean Elliott, and Carl Watts, Jr. will officiate with burial to follow in Piedmont Cemetery. The family will receive friends on Saturday from 5:00 until 7:00 pm at the funeral home. Mr. Watts was born in Camden, SC on April 6, 1934. He was a son of Clarence Watts and Loma Gladden Watts. He was a member of the Red Hill Baptist Church. He was a self employed career truck driver for 57 years. His passion for music led him to learn the piano, guitar, organ, bass guitar, drums, fiddle, mandolin, accordion and the dog box bass. His range of musical talent included country bluegrass and gospel. Along with his wife of 47 years, Diane Sullins Watts, he managed and played with the Moonlighters Band for 20 years. In his early years, his claim to country music fame was his association with the Hired Hands Band, as well as Slim Mims and the Dream Ranch Boys & Girls. He was a regular on the Jim Nesbitt Show and the Slim Mims Sunday Morning Gospel TV show. He spent 18 years spinning country and gospel records on ration station WAGS AM in Bishopville. His love and passion for horses began when he was a small boy. As a young man, he broke and trained horses and was a trick rider. Over the years, he owned many types of horses including Clydesdales and Tennessee Walking Horses. In the 60's, he managed the iconic Andrews Theater in Bishopville. In his spare time, he was cutting and selling firewood, growing and selling water melons, and selling tupperware. He loved his family and his community, and his life and legacy will be forever cherished by those who knew and loved him. He is survived by his loving and adoring wife of 5 years, Barbara Waites Watts of Bishopville, SC; sons, Carl (Deidre) Watts, Jr. of Columbia, SC; daughters, Carlette W. (Craig) McCoy of Bishopville, SC, Melanie W. (Steve McClure) Paulin of Little River, SC; brother, Marion B. Watts of Bishopville, SC; stepchildren, Chris (Tony) Kelly of Camden, SC, Dale (Betty) Ray of Camden, SC; grandchildren, Benjie (Margot) Ray, Michael (Kelli) Ray, Tiffany Ray (Jason) Vilar, Lance (Lorien) Hall, Ashleigh H. (Tanner) Garrett, Courtney W. (Jonathan) Doster, Andrew Watts, Adam (Terry) Paulin; 13 great grandchildren, 11 step grandchildren, 11 step great grandchildren; 2 step great-great grandchildren. He was preceded in death by his wife of 47 years, Diane Sullins Watts; daughter, Michelle Watts; 5 sisters and 4 brothers.

The family of Mr. Carl Edward Watts Sr. created this Life Tributes page to make it easy to share your memories.