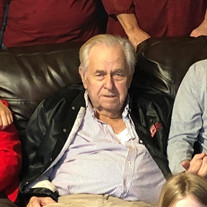 Graveside funeral services for Mr. Clarance J. Tisdale, Jr., 81, who entered into rest on Wednesday, May 15, 2019, will be held at 2 o'clock on Saturday, May 18, 2019, at Lucknow Baptist Church Cemetery. Mr. Myron Arrants will officiate and... View Obituary & Service Information

The family of Mr. Clarence J. Tisdale Jr. created this Life Tributes page to make it easy to share your memories.

Send flowers to the Tisdale family.