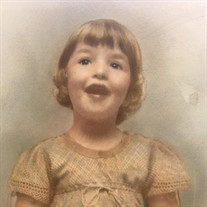 Funeral services for Mrs. Constance Hope Joyner Hopkins Hayward, 58, who died peacefully on May 8, 2017, will be held at 4 o'clock pm on Friday, May 12, 2017, at Community Bible Church. The Rev. Jerry Peacock will officiate with burial to follow... View Obituary & Service Information

The family of Mrs. Constance Hope Joyner Hopkins Hayward created this Life Tributes page to make it easy to share your memories.

Send flowers to the Hayward family.