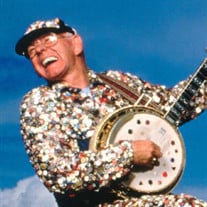 Mr. Dalton J. Stevens, 86, known to all as "The Button King", died peacefully on Monday, November 21, 2016. Funeral services will be held at 12 o'clock on Saturday, November 26, 2016, in the Robert E. Lee Academy Gymnasium. The Rev. Randy Wilson and The Rev. Hazel Mixon will officiate the service with a private burial to follow. The family will receive friends from 5:00 until 7:00 pm on Friday, November 25, 2016, at Hancock-Elmore-Hill Funeral Home. Memorials may be made to The Button Museum, 55 Joe Dority Road, Bishopville, SC 29010. Dalton Stevens, The Button King, passed away on November 21, 2016 at 4:15 PM. Born on April 28, 1930, he was a son of the late William and Susie Stewart Stevens. Dalton was a wonderful husband and father and a beloved member of the community. Most of his life revolved around music and entertaining. He bought his first banjo in 1962 and played up until his passing. People said he was the best banjo player around. In the 1960's, he played on WIS-TV with Hill Billy John. He taught all of his children to play an instrument and formed a band called The Stevens Family. In 1983, The Button King was coined. He sewed, glued, and collected buttons from all over the world. This endeavor opened many doors and took him to many places with his wife by his side. In the 1980s, you could see him on national TV shows, such as The Tonight Show with Johnny Carson, The David Letterman Show, Regis and Kathy Lee, and on the road with Charles Kuralt, just to name a few. He was not only an extraordinary entertainer; he was a generous and giving human being. He could be seen delivering sweet potatoes or peaches throughout the community. He simply loved people and they loved him. He will be missed. He is survived by his son, JD (Vicki) Stevens of Bishopville, SC; daughters, Mary Frances (Ted) Crolley of Camden, SC, Carolyn (MD) Stevens of Bishopville, SC; grandchildren, Stephanie (Johnford) Murray of Florence, SC, Adrianne (Jeremy) Murphy of Mt. Pleasant, SC, Nikki (Dustin) Thompson of Hanahan, SC; great-grandchildren, Kailee Murray of Florence, SC, Taylor Murphy of Mt. Pleasant, SC, Harrison Murphy of Mt. Pleasant, SC, Sydney Thompson of Hanahan, SC. He was preceded in death by his loving wife, Ruby Smith Stevens, and infant daughter, Terry.

The family of Mr. Dalton "The Button King" Stevens created this Life Tributes page to make it easy to share your memories.

Send flowers to the Stevens family.