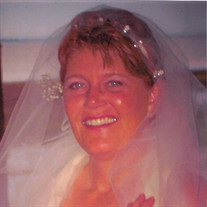 Funeral services for Mrs. Dana Cathryn Cox Gregory, 54, who died peacefully on June 11, 2017, will be announced by Hancock-Elmore-Hill Funeral Home. In lieu of flowers, memorials may be made in her honor to the Lee County Animal Shelter, 101... View Obituary & Service Information

The family of Mrs. Dana Cox Gregory created this Life Tributes page to make it easy to share your memories.

Send flowers to the Gregory family.