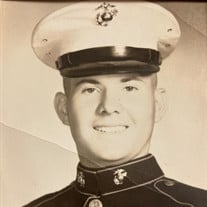 David Everett Brown, Sr., 80 of Bishopville passed away peacefully on Monday March 1st, 2021. He was born in Allentown, NJ to Everett and Esther Brown. In addition to his parents, he is preceded in death by his son, David, Jr. and his brothers Vernon Everett Brown and Paul Brown, Sr. David served as Corporal in the US Marine Corps during Vietnam stationed in Okinawa, Japan. David was a member of the Masonic fraternity formerly of Pemberton, NJ and a member of the Shriners. After serving his country and honorably separating from the military, David worked as a salesman for Sears, Roebuck & Co and later worked as an insurance salesman. Most who knew David know that he never met a stranger and loved to gab over a cup of coffee at any local diner. He was a member of Memorial Chapel Church of the CMA of Bishopville. He loved to travel as often as possible with his wife, Carol and his family. Over the years, the two traveled all over the country with their children and grandchildren. He was an avad stamp collector, enjoyed camping, walking in nature, and enjoyed spending time and traveling with his grandchildren and great-grandchildren.  He is survived by his wife, Carol Jean Heaton Brown of Bishopville, SC; His son Charles Brown, of Newport, PA; His son Harry Brown of Bishopville, SC; His daughter Vivian (Stephen) Bissett of Effingham, SC; His daughter Judy Brose of Columbus, NJ; grandchildren David Brown; Connie (William) Grooms; Jason Brown; Lydia (Clint) Roberts; Katherine (David) Schwalbach; Sarah (Troy) Reason; Richard Brose; Edmund Brose; Joshua Ryan; Timothy Brose; Emily Davis; Devin Brown; many great grandchildren; his brother Jonathan (Angela) Brown of Browns Mills, NJ; and his sister Esther (Thomas) Holiday of Yeardley, PA.  He will be so deeply missed by his friends and family.  A memorial service will be held at 4:00 p.m. on Friday, March 5, 2021 in the Chapel of Hancock-Elmore-Hill, Bishopville, SC. The Rev. Steve Winburn will officiate and the family will receive friends following the service. Brown-Pennington-Atkins Funeral Directors are caring for the family assisted by Hancock-Elmore-Hill Funeral Directors. The family ask that flowers be sent to the family home and in lieu of flowers, donations be made to Wounded Warrior Project.

David Everett Brown, Sr., 80 of Bishopville passed away peacefully on Monday March 1st, 2021. He was born in Allentown, NJ to Everett and Esther Brown. In addition to his parents, he is preceded in death by his son, David, Jr. and his brothers... View Obituary & Service Information

The family of Mr. David Everett Brown Sr. created this Life Tributes page to make it easy to share your memories.

Send flowers to the Brown family.