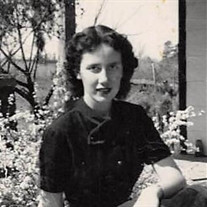 Funeral services for Mrs. Ella Willene Marsh Smith, 84, entered into rest on Wednesday, November 6, 2019, will be held at 11 o'clock on Saturday, November 9, 2019, in the First Baptist Church of Bishopville The Rev. Todd Latham will officiate with burial to follow in Piedmont Cemetery. The family will receive friends in the Fellowship Hall, one hour prior to the service. Ella Willene Marsh Smith was better known as "Miss Willene" to many alumni of Bishopville High School. Born amid the Great Depression, she endured the hardships of her farm family, growing up near the Browntown section of Lee County. She attended Central School near Red Hill, SC, where she graduated with honors. Among her schoolmates was Viva Stokes Davis, a lifelong close friend. Other longtime friends include Betty Lou Watson and Susan Cole. Willene went to work at the Biflex women's wear factory on Gregg Street in Bishopville after high school and met her future husband, Gordon H. Smith, who also worked there. They were married in November 1953 and remained so until Gordon's passing in June 2011. During their marriage, Willene worked for the Lee County Board of Education and later as secretary to the principal of Bishopville High School for many years. In this role she was - and still is - endeared as "Miss Willene" to hundreds of BHS graduates and other students. Later she worked as a secretary at Suburban Propane Gas on Cotton Street. She is survived by her loving sons, Gordon Derek Smith of Williamsville, NY, Mark Chandler Smith of Sumter, SC; sister, Joyce Marsh (Roy) Perkins of Bishopville, SC; sister-in-law, Olen Farmer Marsh; various nieces and nephews. Her extended family includes the congregation of the First Baptist Church of Bishopville, where she taught Sunday school and was a dedicated member for many decades. The church and her deep faith were her lifeblood, as were her many Baptist friends who shared her devotion over the years.

Funeral services for Mrs. Ella Willene Marsh Smith, 84, entered into rest on Wednesday, November 6, 2019, will be held at 11 o'clock on Saturday, November 9, 2019, in the First Baptist Church of Bishopville The Rev. Todd Latham will officiate... View Obituary & Service Information

The family of Mrs. Ella Willene Marsh Smith created this Life Tributes page to make it easy to share your memories.

Send flowers to the Smith family.