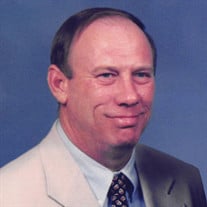 Funeral services for Mr. George Rembert Beasley Sr., 73, who died peacefully on Friday, May 26, 2017, will be held at 11 o'clock on Monday, May 29, 2017, at St. Luke United Methodist Church, Elliott, SC. The Rev. Jim Ridenhour will officiate with burial to follow in the church cemetery. The family will receive friends from 6:00 until 8:00 pm on Sunday, May 28, 2017, at Hancock-Elmore-Hill Funeral Home. In lieu of flowers, memorials may be made to St. Luke United Methodist Church, PO Box 308, Lynchburg, SC 29080. Geroge Rembert Beasley died on May 26, 2017, in a Florence hospital after an illness. Born Lee County, SC, he was a son of the late Herbert Lewis Beasley and Etta Harris Beasley. He was a lifelong member of St. Luke United Methodist Church where he served on many committees. He graduated from Lynchburg High School and Carolina College of Commerce, Florence, SC. He worked as a supervisor at Reeves Brothers in Bishopville for more than thirty years until it closed. He then worked at Gayley and Lord in Society Hill and Gold Kist in Sumter. He was an EMT with the Bishopville Rescue Squad for eight years. He enjoyed sports as a spectator and as a participant. He coached little league baseball for several years and played in the Reeves Brothers Golf League. He was married to his loving wife, Dora Jean, for more than forty-seven years and dearly loved his family and his church. He is survived by his loving wife, Dora Jean Johnson Beasley of Bishopville, SC; daughter, Kathryn Denise Beasley of Bishopville, SC; son, George Rembert "Bert" (Heather) Beasley, Jr. of Lydia, SC; two dearly loved granddaughters, Mava "Ava" Rose Beasley and Emma Grace Beasley; sisters, Olivia Baker of Pamplico, SC, Mary (Richard) Watford of Bishopville, SC; Anna Mosely of Sumter, SC. In addition to his parents, he was preceded in death by his brother, William Lewis (Judy) Beasley of Nederland, TX.

Funeral services for Mr. George Rembert Beasley Sr., 73, who died peacefully on Friday, May 26, 2017, will be held at 11 o'clock on Monday, May 29, 2017, at St. Luke United Methodist Church, Elliott, SC. The Rev. Jim Ridenhour will officiate... View Obituary & Service Information

The family of Mr. George Rembert Beasley Sr. created this Life Tributes page to make it easy to share your memories.

Send flowers to the Beasley family.