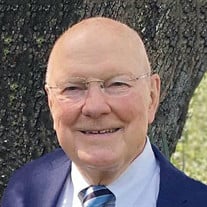 Dr. George Richard Cousar, Jr. died on September 15, 2021, following a ten-month battle with Myelodysplastic Syndrome. George was born on January 11, 1934, in Covington, Virginia, where his parents were visiting while on furlough from the American Presbyterian Church Congo Mission in the former Belgian Congo (Presently, the Democratic Republic of the Congo). As the son of medical missionaries, he spent the majority of his childhood in the Congo and attended Central School at the mission station in Lubondai. His ancestral home was in Bishopville, South Carolina, and the family spent the war years of WWII there. George was a graduate of Davidson College (Class of 1956), Duke University Medical School (Class of 1960), and completed his medical internship at Philadelphia General Hospital in 1961. He married the former Laura Catharine Clement of Memphis, Tennessee, on June 26, 1961. George served as a physician and Captain in the United States Army for two years and was stationed in Phnom Penh, Cambodia, from November 1961 through November 1962. He was a resident in ophthalmology at Duke University from 1963 - 1967. George was a Fellow in the American College of Surgeons as well as in the American Academy of Ophthalmology. He was in private practice in Greenville, South Carolina, for 46 years with a specialty in cataract-related refractive surgery and served as President of the medical staff at Greenville Memorial Hospital from 1985 -1986. He was a member and Elder at First Presbyterian Church. George and his wife, Laura, retired to Charleston, South Carolina, in 2014. He was a member of Saint Michael's Church in Charleston. George is survived by his wife; two daughters, Catharine Cousar Perkins and Martha Cousar Boyd (Eddy), both of Charleston; and three grandchildren, Clement Perkins Jones (Carter) of Atlanta, Georgia, William DeWitt Perkins, Jr., and George Cousar Perkins both of Charleston. He was preceded in death by his parents, Gertrude Hermine Hillegeist and George Richard Cousar, and two sisters, Louise Cousar Pattison and Margaret Cousar Tooke. A graveside funeral service to honor his life will be held at 3 o'clock on Saturday, June 18, 2022, at the Bishopville Presbyterian Church Cemetery. The Rev. Randall R. Shirley will officiate, and the family will receive friends at a reception in the Fellowship Hall following the service. In lieu of flowers, memorial donations may be made to Saint Michael's Church Task Force for Foreign Missions. "Now unto Him that is able to keep you from falling and to present you faultless before the presence of His glory with exceeding joy." - Jude 1:24 The Directors of Hancock-Elmore-Hill Funeral Home are caring for the family.

Dr. George Richard Cousar, Jr. died on September 15, 2021, following a ten-month battle with Myelodysplastic Syndrome. George was born on January 11, 1934, in Covington, Virginia, where his parents were visiting while on furlough from the... View Obituary & Service Information

The family of Dr. George Richard Cousar Jr. created this Life Tributes page to make it easy to share your memories.

Send flowers to the Cousar family.