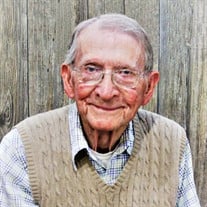 George Washington Watts, a native South Carolinian from Lee County, passed away on Sunday, December 29, 2019, in Simpsonville. He was a career insurance executive with Woodmen of the World Life Insurance Society which is now known as Woodmen Life, serving Lee County and surrounding areas until he was promoted and transferred to Area Manager in Greenville. He was a WWII Navy veteran who left high school, where he played varsity football for the Bishopville Dragons, to serve his country but returned after his discharge to graduate. Mr. Watts was active in Christian service in his home church of First Baptist Church - Mauldin and served as Sunday School Assembly leader and an ordained deacon. He enjoyed many hobbies, including golf, fly-fishing, working on vintage fly rods, family genealogy, and collecting vintage tobacco items, which was inspired by his work in the tobacco fields as a young boy. He could quickly explain the confusing genealogical phrase, “First cousin once removed” and frequently did to all who would listen. He was a Clemson Tiger fan, but never complained or hesitated to write tuition checks for his son that attended the University of South Carolina. Raised in rural Lee County during the depression, he became orphaned after the death of his parents in successive flu epidemics. He then lived with relatives who gave him a home and taught him about farm life and the work that goes with it. This life experience provided the discipline he relied upon to establish his successful career in business. Mr. Watts is survived by his wife Ann Layton Watts of Simpsonville; his sons, Wayne Watts, and wife, Cindy, of Conyers, GA, and Reggie Watts and fiancee, Vickie, of Greenville; his daughter, Janet Henderson, and husband, Joel, of Simpsonville; five grandchildren; and six great-grandchildren. A visitation will be held Thursday, January 2, 2020, from 10:00 AM until 10:45 AM at First Baptist Church - Mauldin followed by the funeral service at 11:00 AM. Burial will be Friday, January 3rd at 2:00 PM in the Ashwood Church Cemetery, Sumter, SC. Hancock-Elmore-Hill Funeral Home is assisting Thomas McAfee Funeral Home locally in caring for the family.

George Washington Watts, a native South Carolinian from Lee County, passed away on Sunday, December 29, 2019, in Simpsonville. He was a career insurance executive with Woodmen of the World Life Insurance Society which is now known as Woodmen... View Obituary & Service Information

The family of Mr. George Washington Watts created this Life Tributes page to make it easy to share your memories.