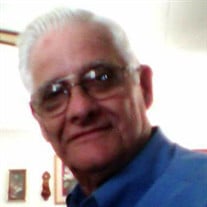 Mr. Glenn D. Segars, Jr., 77, entered into rest on Friday, December 29, 2017. Funeral services will be conducted at 2:00 p.m. on Monday, January 1, 2018 from Memorial Chapel with The Rev. Paul Atkinson and The Rev. Gary Boykin officiating. Burial with military honors and Masonic rites will be in Piedmont Cemetery. The family will receive friends from 4:00 until 6:00 p.m. on Sunday, December 31, 2017 at Hancock-Elmore-Hill Funeral Home. Memorials may be made to Memorial Chapel, 2509 Green Lane, Bishopville, SC 29010. Mr. Segars was born in Darlington Co., SC to the late Glenn D. Segars, Sr. and the late Augusta Munn Segars. He was a charter member of Memorial Chapel where he served as an elder and Sunday School teacher. He served in the United States Marine Corps, retired from DuPont after 34 years of service, and was Chaplain of American Legion Post 29. He is survived by his wife of 54 years, Betty Jean Farmer Segars of Bishopville, SC; son, Ronald (Tammy) Segars of Sumter, SC; daughter, Jeanna (Wally) Melton of Bishopville, SC; brother, Edward Segars of Ridgeway, SC; grandchildren, Jenna Melton and Lilly Carpenter. In addition to his parents, he was preceded in death by his brother, Jack Segars, Sr.

The family of Mr. Glenn D. Segars Jr. created this Life Tributes page to make it easy to share your memories.

Send flowers to the Segars family.