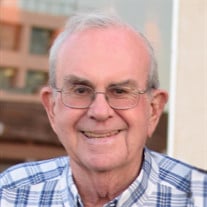 Memorial services for Dr. Jerry C. Bush, 72, the widower of Dr. Claranne M. "Tinky" Bush, will be held at 2 o'clock on Friday, September 23, 2016, in The Chapel of Hancock-Elmore-Hill funeral home with The Rev. Dr. Rusty Wilson officiating. Reception to follow the service at The Oaks, 2530 Saint Charles Road, Bishopville, SC 29010. Beloved husband, brother, uncle, and friend, Dr. Bush, passed away on Monday, August 15. Born in Louisville, KY in 1944, Dr. Bush grew up with a love of animals and a desire to farm as his parents’ families had done for generations in Kentucky. As a child, he was happiest running around his grandparents’ farms in Louisville and Eminence, KY. In pursuit of his first passion, Jerry attended the University of Kentucky and later transferred to Auburn University where he received his Doctor of Veterinary Medicine degree. Most importantly, while attending Auburn, he met the love of his life and future wife, Claranne (Tinky) McCutchen. The couple married not long after graduation at Tinky’s family home in Bishopville and began a life devoted to one another, their intellectual passions and a desire to travel the globe. As a young married couple, they moved to Lubbock, TX where Jerry served as a captain in the Air Force from 1969 to 1971. After completing his service, they moved to Alberta, Canada where Jerry worked as a large animal vet. Even in later years, Jerry’s eyes would light up when he talked about his love of treating animals, cows in particular. After many years of practicing veterinary medicine, Jerry and Tinky returned to Bishopville where he decided to pursue his other childhood dream of farming, establishing “J and J Farms” with Tinky’s brother, John Henley McCutchen. Jerry also continued to serve the veterinary needs of animals in the community and, after retiring from farming, helped to manage the St. Charles cotton gin. He and Tinky were passionate about their own boxer dogs whose names always started with the letter “A” in honor of their alma mater. Jerry and Tinky spent much of their free time traveling and especially loved taking cruises in exotic locales around the globe. Jerry loved to fish and relished time spent fishing with his buddies in South Carolina, Florida and beyond. In recent years, he took great pleasure in teaching his great-nephew to fish, always celebrating even the smallest brim pulled from the pond behind his house. Generally good natured, Jerry was easy to talk with, quick with a smile and had a keen sense of humor. Jerry is survived by his sister Gay B. (Stanley) Matthews and his two nephews Keith Matthews (Marlen) of Frisco, TX and Kenneth Matthews (Emily) and their children Lucas and Cora Matthews of San Francisco, CA. And also by Annie, the last of his boxer dogs. He was preceded in death by his beloved wife of 44 years. In lieu of flowers, memorials may be made to the Dr. Claranne M. Bush Scholarship Endowment, College of Science and Mathematics, Auburn University, 315 Roosevelt Concourse, Auburn, AL 36849-5319.

The family of Dr. Jerry C. Bush created this Life Tributes page to make it easy to share your memories.

Send flowers to the Bush family.