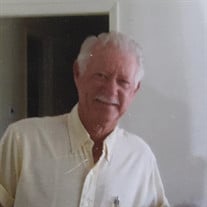 Funeral services for Mr. John Jack Elmore, 79, will be held at 2:00 p.m. on Monday, December 19, 2016 in the Hancock-Elmore-Hill Chapel. The Rev. Brandon Watts and the Rev. Michael Poole will officiate with burial in Cedar Creek Baptist Church Cemetery. The family will receive friends one hour prior to the service at the funeral home. John went home to be with the Lord on Friday, December 16, 2016. He was born in Bishopville, SC on October 25, 1937 to the late Harvey Lee and Lucille Ellison Elmore. John was a Christian who rededicated his life to the Lord Jesus Christ at the age of 35 and walked with God all the days after. He was a family man ever loving his brothers and sisters. He talked so often of all the fun he had growing up in a large family. John was a joyful servant, serving his country in Korea as a military policeman and a paratrooper. He later served as a police officer in Bishopville, SC. Always willing to serve anyone at anytime with anything whether it was helping with a flat tire or whatever was needed. John was a hard worker and could fix just about anything. He was a cabinet maker, contractor, roofer, and later did lawn mower repairs. John was a father who loved his children with an unselfish love. He prayed for them everyday. He was a husband to his wife Cindy. He was her protector, her provider, a brother, and an example of the fathers love. "Husbands love your wives as Christ loved the Church and gave himself up for her." Ephesians 5:25 Surviving are his wife, Cynthia Elmore of the home; son, Ricky (Sandra) Elmore of BIshopville, SC; daughters, Kathy (Dale) Sauls of Rock Hill, SC; Tina Johnson of Hopkins, SC; brothers, Buddy, Tommy, Walter, and Joe, all of Bishopville, SC; sister, Sara of Bishopville, SC; grandchildren, Nicholas, Jacob, Josh, and Stacey and a great-granddaughter, Lacey. He was preceded in death by his sister, Rosa and brothers, Woody, Harvey, and Henry. Memorials may be made to the Ashwood Volunteer Fire Dept., 4392 US-15, Sumter, SC 29153 or to St. Jude Children's Research Hospital, 332 N. Lauderdale Memphis, TN 38105. www.hehfunerals.com

Funeral services for Mr. John Jack Elmore, 79, will be held at 2:00 p.m. on Monday, December 19, 2016 in the Hancock-Elmore-Hill Chapel. The Rev. Brandon Watts and the Rev. Michael Poole will officiate with burial in Cedar Creek Baptist Church... View Obituary & Service Information

The family of Mr. John J. Elmore created this Life Tributes page to make it easy to share your memories.

Funeral services for Mr. John Jack Elmore, 79, will be held at...

Send flowers to the Elmore family.