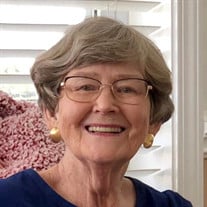 Judith Austin Watkins, 77, child of God, died on October 31, 2020, following an extended illness. She was born Judith Jenkins Austin in Bishopville, SC on November 12, 1942, to Hal Carnes (H.C.) Austin, Sr. and Betty McCutchen Austin. She graduated from Bishopville High School in 1961. She earned degrees from Coker College and Francis Marion University. Judith was a retired educator who taught in public schools in Lee County. In her 30-year career, she was a third-grade teacher, a special education teacher, an administrator, and a grant writer with a personal passion for the beatification of the Bishopville and Ashwood, SC communities. First and foremost, Judith was a disciple of Jesus Christ, having dedicated her life to Him in 1980. She was a life-long member of the Bishopville Presbyterian Church where she served, among other things, as a Sunday school teacher, deacon, elder, and treasurer. Judith married William, the love of her life, on June 15, 1963. Together they raised two sons whom they love with all their hearts. Among her most cherished titles was “MiMi”, as she was known by her belovèd grandchildren. Judith was an advocate and a voice for people and animals sometimes forgotten by society. She was a servant in the truest sense of the word. Those who really knew her will remember her for her faith in Christ, her kindness, gentleness, compassion, and her willingness to help any person or animal in need. She was pre-deceased by her parents and her brother Hal Carnes “Buddy” Austin, Jr., who passed in 1992. Surviving are her husband of 57 years, William Angus Watkins, of the home. Sons: William Britton Watkins (Josh Feldman) of San Francisco, CA; and Ryon Austin Watkins (Lendi) of Florence, SC. Grandchildren: Landon Austin Watkins and Julia Britton Watkins of Florence, SC. Her sister and best friend Gerald Austin “Geri” Cutler (Ken) of Columbia, SC. Sister-in-law, Bobbi Adams of Bishopville, SC, and cherished family friend Ruth Jackson, also of Bishopville. In addition, she was blessed with a large and loving family of brothers- and sisters-in-law, cousins, nieces, and nephews too numerous list. Hancock-Elmore-Hill Funeral Home of Bishopville, SC, is caring for the family. Her family will have a private Celebration of Life Service. The family expresses their sincere appreciation to the staff at Kershaw Health Hospice and McLeod Hospice for their compassionate care in Judith’s final days. Memorials may be made to the Bishopville Presbyterian Church, PO Box 66, Bishopville, SC 29010, or Friends of the Lee County Animal Shelter, PO Box 309, Bishopville, SC 29010.

The family of Mrs. Judith Austin Watkins created this Life Tributes page to make it easy to share your memories.

Send flowers to the Watkins family.