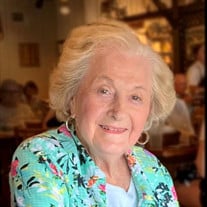 A funeral service for Mrs. Margaret Raley Clark, 100, who entered into rest on Thursday, August 12, 2021, will be held at 3 o'clock on Sunday, August 15, 2021, in the First Baptist Church of Bishopville, SC. The Rev. Dr. James Jordan will officiate with burial to follow in Evergreen Cemetery, Sumter, SC. The family will receive in the Fellowship Hall one hour prior to the service. Hancock-Elmore-Hill Funeral Directors are caring for the family. Memorials may be made to the First Baptist Church, 229 W. Church Street, Bishopville, SC 29010, or Amedysis Hospice of Sumter, 198 Wesmark Blvd. Suite 2, Sumter, SC 29150. Mrs. Clark was born on April 13, 1921, in Jefferson, SC, the daughter of the late William and Mamie Raley. She was truly a member of the Greatest Generation, being blessed to live for over 100 years. She had a happy childhood on the family farm in the Roaring ’20s, became a teen during the Great Depression, and a young wife and mother during World War II, where she learned the value of faith, family, friends, and love of country. She graduated from Macedonia-Angelus High School in Chesterfield County and was the last surviving member of her Class of 1939. She loved sports and was a talented high school basketball player. She made the first team all four years and shot a basket in the old gym at a class reunion when she was 80. Through the years she enjoyed watching her favorite sports on TV and cheering for the USC Gamecocks and Atlanta Braves. After she graduated from high school, she attended cosmetology school in Charleston. She was later hired to work in a shop in a hotel in Bethune, SC. Her first task was to arrive early and build a wood fire to boil water for the vat to be used for all the shampoos that day. After taking time out to raise her daughter, she worked in several shops in Sumter before retiring at 80. She was a member of Westminster Presbyterian Church in Sumter; and after moving to Bishopville, attended First Baptist Church in Bishopville to worship with her family. She was a member of the Pilot Club of Bishopville and was recognized at the SC District Pilot Club Convention in Columbia in April as the international organization was also celebrating its centennial year. Also in April, she enjoyed a 100th birthday party with family and friends. She was presented a plaque in recognition of her 100th birthday by the City of Bishopville and a Proclamation declaring Margaret Clark Day in Bishopville by the Mayor and City Council for her service and dedication to the community. She enjoyed fishing and playing checkers with her great-grandchildren and recently enjoyed a family vacation at North Myrtle Beach. Mrs. Clark was preceded in death by her husband, Quincy Clark, who was her sweetheart since the fourth grade. They were married 70 years and had one daughter, Carolyn Tisdale Cumalander; three grandchildren, Sam Ashley Tisdale, III (Pam) of Bishopville, Teresa Purvis of Sumter, and Clark Tisdale (Rhonda) of Marion; seven great-grandchildren, Brittany Richardson, (Jeffery) of Sumter, Brad Barwick (Rebecca), Sam Tisdale, Carolina Tisdale, Matthew Tisdale of Bishopville, Chandler Tisdale and Christian Tisdale of Marion; three great-great-grandchildren Sam Tisdale V, Asher Richardson, and Anniston Barwick. Mrs. Clark was also preceded in death by her seven brothers, Waldo, Chester, Adrian, Rembert, Lowery, Ramsey, and Johnny Raley, one sister, Louise Scott; a great-great-granddaughter, Averie Richardson, and a loving son-in-law, George Cumalander.

A funeral service for Mrs. Margaret Raley Clark, 100, who entered into rest on Thursday, August 12, 2021, will be held at 3 o'clock on Sunday, August 15, 2021, in the First Baptist Church of Bishopville, SC. The Rev. Dr. James Jordan will officiate... View Obituary & Service Information

The family of Mrs. Margaret Raley Clark created this Life Tributes page to make it easy to share your memories.

A funeral service for Mrs. Margaret Raley Clark, 100, who entered...

Send flowers to the Clark family.