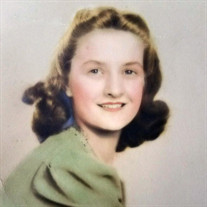 Margaret Morrow Mimms joined the church triumphant April 4, 2017, at the age of 92. A celebration of her life will be held at 11 o'clock on Saturday, April 8, 2017, at St. Luke United Methodist Church, Elliott, SC. The family will receive friends following the service at the church fellowship building. In lieu of Flowers, the family requests Memorials be made to St. Luke United Methodist Church, PO Box 308, Lynchburg SC 29080. Hancock-Elmore-Hill Funeral Home is serving the family. She was born in Gastonia, North Carolina on August 1, 1924, to the late Mr. and Mrs. Sloan Alexander Morrow. She graduated from Limestone College with Bachelor of Arts degree and served as the president of the student body during her senior year. She received her Master’s Degree from Francis Marion University in 1980. While at Limestone, Margaret met the love of her life, Charles Marion Mimms, Jr. They married on June 17, 1947, and began their life together in the little community of Elliott, SC. Margaret quickly developed a love for her community and her dear church, St. Luke United Methodist, where she played the organ, taught Sunday school, assisted with Bible school, directed many Christmas programs, participated in the United Methodist Women’s organization, and was a dedicated servant to her church and God. She also served as a Lay Speaker for the United Methodist Church. Margaret devoted many hours to community organizations. She was an active member of the American Legion Auxiliary, Daughters of the American Revolution, Garden Club, and the Lee County Historical Society. While at Limestone she was a member of Who’s Who. Margaret was also a reading buddy at St. James Santee Elementary School while living in Charleston. She also loved playing bridge, golfing, gardening, and cheering for the Clemson Tigers. Margaret’s love for her community was endless as she was willing to give so much of her time to assist in many civic functions. Even after moving to Sandpiper Village Retirement, Margaret assisted with Meals on Wheels weekly. While there, she received the Senior Service Award presented by Charleston County Council on Aging. Along with her selfless love and devotion to her family, Christ, and the community, she spanned eight decades teaching in the public school system in Lee County. She started teaching in the 1940’s and continued until she was 86 years old. Throughout her teaching career, she taught elementary, high school, and adult education. It was during her last few years of teaching adult education that she experienced one of her proudest professional moments when she taught a 62-year-old woman to read. Margaret’s love for her students and for learning has touched many lives in Bishopville. Family was Margaret’s greatest love. She selflessly gave of her time to her children and grandchildren always encouraging them to do their best. Gan was their best cheerleader in life following them to every event in which they participated – ballgames, dance recitals, piano recitals, school programs, and church programs. She knew more than the coaches, referees, or umpires in every sport, and had no inhibitions about telling them what to do. She is survived by her daughter, Sarah Margaret Mimms (Tony Nash) of Murrells Inlet, SC; sons, Charles Marion Mimms III (Edy) of Charleston, SC; Sloan Morrow Mimms of Elliott, SC, and John Christopher Mimms (Barbara) of Cheraw, SC. She is also survived by ten grandchildren: Meg Outlaw, Rhetta Rowland, Elizabeth Howell, Jennifer Stoddard (Hugh), Charlie Mimms (Melissa), Rion Mimms (Lauren), Player Mimms, Elliott Mimms, Parker Mimms, and Weber Mimms; and six great-grandchildren: Hayden Howell, Campbell Outlaw, Anna Stoddard, Toland Stoddard, Margaret Mimms, and Adley Mimms. “Many women do noble things, but you surpass them all.” Proverbs 31:29

Margaret Morrow Mimms joined the church triumphant April 4, 2017, at the age of 92. A celebration of her life will be held at 11 o'clock on Saturday, April 8, 2017, at St. Luke United Methodist Church, Elliott, SC. The family will receive friends... View Obituary & Service Information

The family of Mrs. Margaret Morrow Mimms created this Life Tributes page to make it easy to share your memories.

Send flowers to the Mimms family.