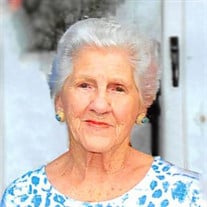 Funeral services for Mrs. Margery Louise Woodham Jeffords, who passed peacefully in her home on January 28, 2018, will be conducted at 2 o’clock on Thursday, February 1, 2018, from the Bishopville Presbyterian Church. The Rev. Christopher Parnell will officiate with burial to follow in Bethlehem United Methodist Church Cemetery. The family will receive friends from 5:00 until 7:00 pm on Wednesday, January 31, 2018, at Hancock-Elmore-Hill Funeral Home. A reception in the Bishopville Presbyterian Church Fellowship Hall will follow the burial. Hancock-Elmore-Hill Funeral Home is serving the family. Mrs. Jeffords was born in Bishopville, SC on Dec. 24, 1925, the daughter of the late Vera Chappell Woodham and Alva Leslie Woodham, Sr. and the widow of Hugh Hamilton Jeffords. They were married for 53 years. She graduated from Bishopville High School in 1942 and Limestone College in 1946. During her years at Limestone, Mrs. Jeffords was the president of the national honorary literary society Chi Delta Phi, a member of Alliance Francaise, College Choir, the annual staff, Dance Group, Drama Club, Phi Kappa Theta sorority, Who’s Who, and the 1946 Follies director. After graduation, she taught music at Bishopville High School and public school music at Bishopville Elementary and Grammar Schools. She also taught several years at Robert E. Lee Academy. In later years before retirement, she taught privately. Mrs. Jeffords was a lifetime member of the American Legion Auxiliary, having first joined as a junior member. She held many offices in the organization and served as President several times. She was for many years the local unit's chairman for Palmetto Girls State, where she worked diligently in assuring that capable, outstanding students were selected to attend Palmetto Girls State. She also served as the state chairman and Senior Counselor of Palmetto Girls State, acting alternately as Director, Music Chairman, and Chaplain. Mrs. Jeffords was a charter member of both the Bishopville Music Club and SC WIFE, a member of the Lee County Historical Society, the UDC, and the DAR, and served on the board of the Lee County Arts Council. She was a member of the Bishopville Presbyterian Church where she shared her talents as a Sunday school teacher and choir member. Surviving are a brother and sister-in-law Willis and Polly Woodham of Spartanburg, SC, a sister-in-law Harriet Woodham of Columbia, SC, three sons and daughters-in-law Michael Hamilton and Lisa Jeffords of Dalzell, SC, David Hugh and Carol Jeffords of Florence, SC, and Robert Leslie (Robin) Jeffords of Columbia, SC, nine grandchildren Jill Wiig (Kevin) and Kate Thomas (Hampton), Patrick Jeffords, Chloe Jeffords, and Caroline James (Drew), Danielle Jeffords, and Nicholas and Weston Jeffords, many nieces and nephews, and twelve great nieces and nephews. Preceding her in death were her husband, daughter Meredith Jane Jeffords, son Patrick Marion Jeffords, grandson David Heath Jeffords, and brother Alva Leslie Woodham, Jr.

Funeral services for Mrs. Margery Louise Woodham Jeffords, who passed peacefully in her home on January 28, 2018, will be conducted at 2 o&#8217;clock on Thursday, February 1, 2018, from the Bishopville Presbyterian Church. The Rev. Christopher... View Obituary & Service Information

The family of Mrs. Margery Louise Woodham Jeffords created this Life Tributes page to make it easy to share your memories.

Send flowers to the Jeffords family.