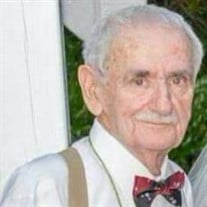 Graveside services for Mr. Marion B. Watts, 80, who died peacefully on Sunday, October 23, 2016 will be held at 11:00 am Wednesday, October 26, 2016 at Antioch Baptist Church Cemetery. The Rev. Carl Watts, Jr. will officiate and Hancock-Elmore-Hill Funeral Home is serving the family. Born in Camden, SC he was a son of the late Clarence and Loma Gladden Watts. He served his country in the United States Army with a tour in Germany. He was retired from Davis Mechanical in Columbia, SC. After his retirement he has enjoyed sitting in his recliner eating 3 musketeers and ice cream sandwiches while watching his favorite games shows and The Days of Our Lives. He was a member of St. Matthews United Methodist Church since moving to Bishopville a year ago. He was a former member of Grace United Methodist Church in Columbia. He was a resident of Columbia for more than 50 years. His passion for music brought him a lot of joy. He was a member of both church choirs and also enjoyed playing his piano. After retiring, he enjoyed traveling and one of his most memorable trips was a visit to Japan. However, his favorite love of his life was the Carolina Gamecocks, he enjoyed season tickets for many years. Surviving are his nieces, Carlette McCoy, Melanie Paulin, Iris Poe, Faye Smith, Annie Patterson, Martha Poe, Esther Watkns, Carsin Gordon, and Libby Watts; nephews, Carl Watts, Jr., Bernie Watts, Gerald Watts, George Watts, Al Gooding, Roy Gooding, David Mitchell, Jimmy Mitchell, Olin Poe, Leon Poe, Cleland Watts, and Alex Watts. He was preceded in death by 5 sisters, 5 brothers, 1 nephew, and 2 nieces. Memorials may be made to McLeod Hospice House, 1203 E Cheves St, Florence, SC 29506, St Matthew United Methodist Church, 2144 Stokes Bridge Rd. W., Bishopville, SC 29010 or to Grace United Methodist Church, 410 Harbison Blvd., Columbia, SC 29212.

Graveside services for Mr. Marion B. Watts, 80, who died peacefully on Sunday, October 23, 2016 will be held at 11:00 am Wednesday, October 26, 2016 at Antioch Baptist Church Cemetery. The Rev. Carl Watts, Jr. will officiate and Hancock-Elmore-Hill... View Obituary & Service Information

The family of Mr. Marion B. Watts created this Life Tributes page to make it easy to share your memories.

Graveside services for Mr. Marion B. Watts, 80, who died peacefully...