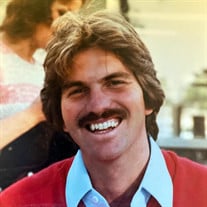 A graveside funeral service for Mr. Michael Arthur Holland, 65, who entered into rest on November 29, 2021, in Georgetown, SC, will be held at 2 o'clock on Friday, December 3, 2021, at St. Matthew United Methodist Church Cemetery. Hancock-Elmore-Hill Funeral Directors are caring for the family. Mike was born on March 12, 1956, and was raised in Bishopville, SC. He was the son of the late Clyde DuBose Holland and Lois Anderson Holland. Mike was a remarkable golfer, winning the High School State Championship and the 1976 South Carolina Golf Association State Amateur Championship. In addition, in 1975 and 1976, he was the Carolinas Four-Ball Champion. He graduated from the University of South Carolina and was a member of the Carolina Golf Team and an NCAA All-American his senior year in 1978. He turned professional in 1978, at the age of 22, and played on the PGA Tour and the Nationwide Tour. Mike had a handful of Top 10 finishes in PGA Tour events: A four-time winner on the Space Coast Mini-Tour, a 1981 PGA World Team Champion, and had two US Open appearances in 1983 and 1984. He won a share of the 1981 Walt Disney World National Team Championship with playing partner Vance Heafner. A year later, he finished a solo 2nd in the Danny Thomas Memphis Classic, losing by six strokes to Raymond Floyd. His best finish in a major was T29 at the 1982 PGA Championship. Mike received the Order of the Palmetto in 1982 from Governor Richard W. "Dick" Riley. The Order of the Palmetto was created by Gov. John West in 1971 to recognize lifetime achievement and service to the State of South Carolina. He received The Key to the City of Columbia, SC, in 1983 for his work for missing children. He was inducted into the South Carolina Golf Hall of Fame in 2006. He is survived by a son, Blake Austin Holland; and daughter, Anna Elizabeth (Michael) Broach. In addition to his mother and father, he was preceded in death by his brother, Clyde Wayne Holland.

The family of Mr. Michael Arthur Holland created this Life Tributes page to make it easy to share your memories.

Send flowers to the Holland family.