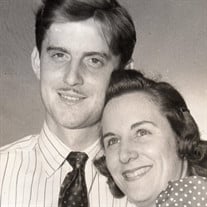 Mrs. Mitchell Smith King, 97, widow of William L. “Bill” King, passed away at McLeod Regional Medical Center on Friday, February 24, 2017. Born in 1919 in Lee County, she was the daughter of the late Connie Vance Smith and the late Kathleen Carnes Smith. She graduated from Bishopville High School and attended Winthrop College. During WWII, she lived with her husband in Pensacola where she contracted polio. Her strength and determination to overcome this debilitating disease led her to work with her husband opening a new business in Bishopville, raising three children, sewing many wardrobe pieces, assisting her husband flipping beach houses, becoming a member of the Bishopville Garden Club, playing bridge with her friends, singing in the choir, becoming a Girl Scout leader and Boy Scout Den Mother and keeping a happy, loving home. She never turned down a chance to assist her family whether it was painting a room or cooking holiday dinners. She leaves behind to mourn her absence in their lives, a son, Lawton (Dee) King and two daughters Susan (Ken) Starnes and Kathy (Bud) Rollins, seven grandchildren and ten great-grandchildren. She was preceded in death by a great grandson, Taylor Bennet; a sister Connie Vaughan; and her husband of 67 years. A memorial service to celebrate her life will be held on Tuesday, February 28, 2017 at 3:00 o’clock in the Chapel of Hancock-Elmore-Hill. Visitation will be at her granddaughter, Laura Bennett’s, home 316 S. Heyward Street and also after the service. In lieu of flowers, memorials may be made to B.A.R.K., First Citizens Bank to the BARK account or mailed to 158 Johnsons Pond Road, Bishopville, SC 29010.

The family of Mrs. Mitchell Smith King created this Life Tributes page to make it easy to share your memories.

Send flowers to the King family.