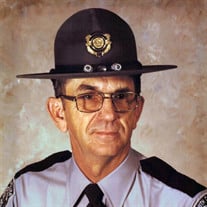 Private family services with Military Honors for Mr. Robert D. Steele, Jr., 90, who entered into rest on Sunday, September 6, 2020, will be held on Saturday, September 12, 2020, in The Chapel of Hancock-Elmore-Hill Funeral Home. The Rev. Kathy Carr will officiate with burial to follow in St. Matthew United Methodist Church Cemetery. Hancock-Elmore-Hill Funeral Directors are caring for the family. Memorials may be made in his honor to St. Matthew United Methodist Church Cemetery Fund in c/o Ralph Baker, 230 Roundup Drive, Bishopville, SC 29010. Mr. Steele, the widower of Vivian Irene Steele, passed away Sunday, September 6, 2020, at his home. He was born on August 18, 1930, in Lancaster, SC, a son of the late Robert Dudley Steele and Emma Almetta Hinson Steele. He was a member of St. Matthew United Methodist Church. He was a veteran, a mason, and a Shriner. He retired from the South Carolina Highway Patrol as Sergeant after 33 years of service. He was an avid hunter. He enjoyed spending time with his family, his cat, working in his yard, and helping his neighbors. He is survived by one daughter, Linda Baker (Ralph) of Bishopville; granddaughter Kerri Baker (Roddy) of Camden and grandson Dr. Dustin Baker of St. Louis, Mo; great-grandchildren, Noah and Matthew Baker of Camden; sisters, Elizabeth Glenn and Brenda Richardson (Bob) of Lancaster and numerous nieces and nephews. In addition to his parents and his wife, he was preceded in death by his brothers, Charles Steele, Harold Steele, and Darwin Steele, and his sister, Joyce Pierce. Serving as pallbearers will be: Dustin Baker, Roddy Baker, Noah Baker, Robby Glenn, Brian Richardson, Brent Richardson, and Tommy Pierce.

Private family services with Military Honors for Mr. Robert D. Steele, Jr., 90, who entered into rest on Sunday, September 6, 2020, will be held on Saturday, September 12, 2020, in The Chapel of Hancock-Elmore-Hill Funeral Home. The Rev. Kathy... View Obituary & Service Information

The family of Mr. Robert Dudley Steele Jr. created this Life Tributes page to make it easy to share your memories.

Send flowers to the Steele family.