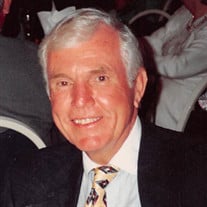 Funeral services for Robert Dellinger Walden, 93, will be held at 2:30 p.m. on Wednesday, February 19, 2020 at Bethlehem United Methodist Church, Bishopville, SC. The Rev. Fran Connell will officiate with burial in the church cemetery. The family will receive friends from 5:30 p.m. until 6:30 p.m. on Tuesday, February 18, 2020 at Hancock-Elmore-Hill Funeral Home. Mr. Walden entered into rest on Saturday, February 15, 2020. Born in Charlotte, NC he was a son of the late Walter Ancel and Edna Dellinger Walden. He was raised in Kannapolis, NC. He served in the United States Army during World War II in Germany, France, and England. He was a member of the Veterans of Foreign Wars and the American Legion. Mr. Walden graduated from Wake Forest College in 1949 with a B.S. degree and was a member of the Sigma Phi Epsilon Fraternity. He was a graduate of The School of Banking of the South, Louisiana State University, class of 1964. He was a banker for 36 years with 30 years at The Peoples Bank of Bishopville, SC serving as executive Vice President, cashier, and a member of the Board of Directors. He retired from First Citizens Bank as Vice President and City Executive after 6 years. He was a member of the Bishopville Advisory Board. He served on the State Board of Directors of the South Carolina Bankers Association and the South Carolina Independent Bankers Association. He also served as president of the Bishopville Jaycees, president of the Bishopville Rotary Club, chairman of the Bishopville Chamber of Commerce, and chairman of the Bishopville Great Town Program. Mr. Walden also served as the director of the South Carolina State Chamber of Commerce 1967 - 1968. He was a member of Bishopville City Council from 1983 until 1987 and served as Mayor Pro Tem 1984 -1985. He was a member of Bethlehem United Methodist Church where he was a former member and chairman of the Administrative Board, and chairman of the Board of Trustees, and member of the Finance Committee. He was also a member of the Audit Committee, Pastor- Parish Relation Committee, and Nominating Committee. He was president of the Men's Bible Class for over 25 years. He was a member of the Board of Directors of Robert E. Lee Academy and was one of the original organizers and builders of Bishopville Country Club. He also served as chairman of Lee County chapter of the American Cancer Society and chairman of the Bishopville chapter of the American Red Cross. He enjoyed golfing, traveling, and working in his yard. Surviving are his wife of 69 years, Frances Payne Walden of the home; children, Donna Beckham, Emily (Brooks) Stuckey, Timothy (Cary) Walden all of Columbia, SC, Beth (Ken) Kirkland of Florence, SC; grandchildren, Ryan (Aly) Stuckey, Marshall (Kathryn) Stuckey, Madison Walden, Brandon Walden, Hampton Walden, Ashley (Garrett) Ryan, Andrew (Rachel) Walden; great-grandchildren, Payne Stuckey, George Stuckey, Charlotte Stuckey, Sam Ryan, Claire Ryan, Mary Frances Walden, and Robert D. Walden, III. His six grandsons will serve as pallbearers. He was preceded in death by a son, Robert D. Walden, Jr. and a son-in-law, Steve Beckham. Memorials may be made to Bethlehem United Methodist Church, PO Box 167, Bishopville, SC 29010 or to a charity of one's choice.

Funeral services for Robert Dellinger Walden, 93, will be held at 2:30 p.m. on Wednesday, February 19, 2020 at Bethlehem United Methodist Church, Bishopville, SC. The Rev. Fran Connell will officiate with burial in the church cemetery. The family... View Obituary & Service Information

The family of Robert D. Walden created this Life Tributes page to make it easy to share your memories.

Funeral services for Robert Dellinger Walden, 93, will be held...

Send flowers to the Walden family.