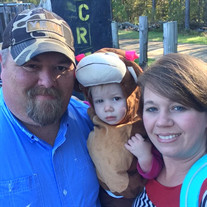 Funeral services for Mr. Russell Bernard "Rusty" Watts, 43, who entered into rest on Sunday, November 24, 2019, will be held at 2 o'clock on Wednesday, November 27, 2019, at Cedar Creek Baptist Church. The Rev. Dr. David Dinkins will officiate with burial to follow in the church cemetery. The family will receive friends from 5:00 until 7:00 pm on Tuesday, November 26, 2019, at Hancock-Elmore-Hill Funeral Home. Rusty was a son of Bernard Cyrus Watts and Karen Baker Watts. Rusty was an active member of Cedar Creek Baptist Church and was a Master Mason. He graduated from Robert E. Lee and Florence Darlington Tech. He was a man of many traits and was currently working at Hobgood Electric. Rusty loved football, especially the Clemson Tigers and Robert E. Lee. He was a coach for his daughter's travel ball team, not only for softball, but he was a baseball coach for many different rec ball teams. One of his most favorite things to do was to sing. He loved to sing gospel and country music. One of his favorite songs to sing was "Lead Me Home" by Jamey Johnson. Most of all, he loved his family. He is survived by his loving wife, Misty Huntley Watts of Bishopville, SC, sons, James Austin Huntley of Bishopville, SC, Russell Bryce Watts of Bishopville, SC; daughters, McKenzie Leigh Watts of Bishopville, SC, Ella Grace Watts of Bishopville, SC; father and mother, Bernard C. and Karen Baker Watts of Bishopville, SC; paternal grandparents, George C. and Sadie Tidwell Watts of Camden, SC; maternal grandparents, Lloyd and Ella Mae Baker of Bishopville, SC. Serving as pallbearers will be Art Hawkins, Donnie Harris, Todd Branham, Jackie Arledge, Russel Brown, John Boyce, Stephen Watkins, Craig Nesbitt, Lee Elmore, and Hugh Logan. Hancock-Elmore-Hill Funeral Home is caring for the family.

The family of Mr. Russell Bernard "Rusty" Watts created this Life Tributes page to make it easy to share your memories.

Customized sympathy cards. Mailed for you.