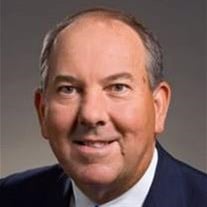 St. Helena Island, SC - Funeral services for Thomas Samuel Welsh Sr., 68, will be held at 12:00 p.m. Friday, August 19, 2016 at Chapin United Methodist Church. Burial will be at 3:00 p.m. at Mt. Zion Presbyterian Church in Bishopville, SC. The family will receive friends from 5:00-7:00 p.m. Thursday, August 18, 2016 at Dunbar Funeral Home, Dutch Fork Chapel, Irmo. Hancock-Elmore-Hill Funeral Home is assisting in Bishopville, SC. his wife, Judy, of 44 years and “Tom” to friends and family, was loved by all who knew him. He was born in Sumter, S.C., the son of the late L.D. Welsh and Dorothy Josey Welsh. A graduate of Clemson University with a Bachelor of Arts in Agricultural Education, he served at Fort Jackson as a First Lieutenant in the Army and began his career with Production Credit Association in Orangeburg, S.C. He moved to Columbia, S.C. in 1978 and worked with Farm Credit Bank as a loyal servant for 38 years and retired as Executive Vice President of Agfirst Farm Credit Bank. Though his intentions were to retire at the beach, family and friends were not surprised watching him continue to lead through his ongoing consulting work with Farm Credit when he started his SeaOats Planning business while living at Saint Helena, S.C. (his little piece of heaven). However, anyone who knew Tom can attest, above all the leadership positions he held, his most coveted was to his family. His infamous grin could be seen at Disney World when he reserved all the princesses for his granddaughter to meet at one of his many conferences and when he held his grandson who was given his name. The same grin was seen when his son, Tommy, could head to Clemson with him and watch the tigers and when he walked his daughter, Jenny, down the aisle. He and Judy constantly welcomed family and friends to stay with them at Harbor Island and nothing pleased Tom more than to have a house full of people eating Beaufort Stew or heading to JCT's for dinner. His “leisure days” were spent heading to the beach at 6am for a run and to serve as a Sea Turtle Patrol volunteer. He was a true Clemson tiger and was dedicated to watching them play at Death Valley with his friends and family. Tom is survived by his wife, Judy Moore Welsh; son, Thomas Samuel Welsh Jr. (Carley E. Welsh); daughter, Jennifer Dorothy Welsh Williamson (Michael E. Williamson); grandchildren, Julia Ann Welsh and Thomas Samuel Welsh III; sister, Carol Welsh Barrineau and brother, Josey Welsh (Pat Welsh). He and his wife, Judy, were members of Sea Island Presbyterian Church where Tom served as an usher for the past five years. In lieu of flowers, charitable donations may be made to the Harbor Island Sea Turtle Project – 162 Harbor Dr, Saint Helena Island, SC 29920, American Cancer Society or Sea Island Presbyterian Church at St. Helena Island, S.C. His passing was abrupt but most likely the way he would want it. No long, sad departure to inconvenience others. He will be missed greatly by all who were lucky enough to have known him. Please sign the online guestbook at www.dunbarfunerals.com.

The family of Mr. Thomas Samuel Welsh Sr. created this Life Tributes page to make it easy to share your memories.

Send flowers to the Welsh family.