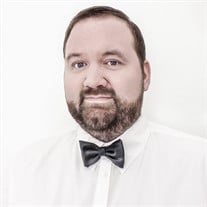 A memorial service for Clyde Napoleon "Trey" Beasley III, who passed away peacefully in his sleep on Sunday, August 13, 2017, at the tender age of 41, will be held at 3 o'clock on Sunday, August 20, 2017, at Bethany Baptist Church, 1146 Manville-St. Charles Road, Bishopville, SC, The Rev. Dr. Jim Chandler officiating. The family will receive friends from 2:30 until 3:00 in the church, prior to the service, and other times at his father's residence, 2514 Raccoon Road, Mayesville, SC. Hancock-Elmore-Hill Funeral Home is serving the family. Trey was raised on Raccoon Road, in Lee County, SC. He was a unique person, an artist, had a superb sense of humor and was always empathetic. Trey was a world traveler. Throughout his life in the States and his travels abroad, he met many people and made friends instantly. He finally found his own personal paradise on this earth in Sweden, where he lived for the past five years and where he passed away. Trey was in a great place in his personal life in his latter years, and there is no doubt that he would want everyone to feel his love and appreciate his memory now that he has passed. Trey certainly made this world brighter, and this world has lost a special treasure now that he has gone to be with the Lord. Trey was the son of Clyde Napoleon Beasley Jr. and the late Rachel Tidwell Beasley. Trey is survived by his father, of Bishopville, SC; sister, Kimberly Beasley Anderson of Sumter, SC; two nieces and three nephews; two great nieces and one great nephew; numerous cousins; numerous aunts and uncles; his special partner in life who he loved and lived with in Sweden for the past five years, Johan Mauritzson. In addition to his mother, Trey was preceded in death by his sister, Janet Beasley Welch. Trey was loved so incredibly much and will surely be missed.

A memorial service for Clyde Napoleon "Trey" Beasley III, who passed away peacefully in his sleep on Sunday, August 13, 2017, at the tender age of 41, will be held at 3 o'clock on Sunday, August 20, 2017, at Bethany Baptist Church, 1146 Manville-St.... View Obituary & Service Information

The family of Mr. Trey Beasley created this Life Tributes page to make it easy to share your memories.

A memorial service for Clyde Napoleon &quot;Trey&quot; Beasley III, who...

Customized sympathy cards. Mailed for you.