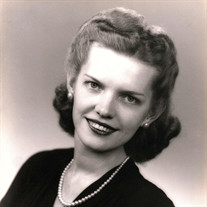 Funeral services for Mrs. Lois Vistula Caughman Shearer, 93, will be held at 3 o'clock on Thursday, August 16, 2018, in The Chapel of Hancock-Elmore-Hill Funeral Home. The Rev. Lawrence Chewning, The Rev. Ron Davis, and The Rev. Allen Lynch will officiate with burial to follow in Salem Church Cemetery. The family will receive friends from 2:00 until 3:00 pm, Thursday, prior to the service. In lieu of flowers, memorials may be made in her honor to Salem Church, PO Box 311, Bishopville, SC 29010, or the Animal Shelter of one's choice. Hancock-Elmore-Hill Funeral Home is serving the family. Born in Lee County, South Carolina, on April 12, 1925. She was the only child of the late Vernon and Lillie Mae (Boykin) Caughman. In good health, she attended St. Andrews Church of God where she was faithful in service to the ministry including teaching Sunday School. She graduated from Central High School in 1941. At the age of 16, she continued her education at Coker College in Hartsville, SC where she would laughingly say “I spent more time in the infirmary “homesick” than I did in the classroom”. This would lead her father to enroll her in Bowen Business College in Columbia, SC, where she would graduate with a Business degree in 1943. In return, Vista introduced her parents to the late John Eugene Shearer from Pennsylvania. They would marry on August 3, 1946, after Johnny promised not to take her far from home. Together they settled in Bishopville, SC on the family farm and raised three children, Diane Shearer of Bishopville, Ronald (Nancy) Shearer of Hartsville and Debbie (Fred) Owens of Laurens. In addition to the above children, Vistula is survived by her grandchildren: Richie (Nicole) Gray, John Major Shearer, Christian Shearer, Chyanne (Kiefer) Patrick, Timothy (Kim) Owens, Michael (Amber) Owens; five great-grandchildren: Joshua, Addison and Riley Owens, Dava and Nola Byrd and preceded in death by great-granddaughter Sophia Jane Gray.

Funeral services for Mrs. Lois Vistula Caughman Shearer, 93, will be held at 3 o'clock on Thursday, August 16, 2018, in The Chapel of Hancock-Elmore-Hill Funeral Home. The Rev. Lawrence Chewning, The Rev. Ron Davis, and The Rev. Allen Lynch... View Obituary & Service Information

The family of Mrs. Vistula Caughman Shearer created this Life Tributes page to make it easy to share your memories.

Send flowers to the Shearer family.