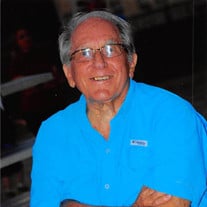 Wilbur Devern McLeod, 83, loving husband of Judy Brown McLeod went to Heaven on October 24, 2016 after a short battle with cancer. The son of Myrtle and Herbert McLeod of Sumter, he was the father of Laurice (Eddie) Prince of Sumter, Kaye (Jim) Baldwin of Gastonia, NC, and Julie Richardson. He is survived by two sisters, Annette Kennedy of Sumter and Elsie Floyd of Lynchburg. He was a wonderful step-father to Hope Barrett (Paul) and Jeremy Keziah of Bishopville and Judith Hake (Kyle) of Richmond, VA. He was Grandaddy to Maurie, Eric, & Jeremy Prince, Samantha Baldwin, Bryce and Caleigh Barrett, Landon Hake, Brandy Mason, Matthew Parrott, Nathan Dabbs, Kaitlan and Taylor Venema and Cloie Turman. Wilbur was a 1951 graduate of Edmonds High in Sumter. He attended USC, Anderson University (Church of God College, Anderson, IN) and graduated Ball State University Teachers College in 1961. He pastored Capital City Church of God in Columbia for several years. He was a contractor for many years, worked for Suburban Propane in Sumter & Hartsville and later founded and owned Ambulance Cot Services until retirement in 2012. He attended Sumter First Church of God for most of his life and later St. Andrew Church of God in Bishopville. He taught Sunday School for many years and served on various boards in the Church of God throughout his life. Wilbur loved life and enjoyed the love of his many friends, young and old. Laughter was always heard when he was around. He especially loved the athletes and faculty of Robert E. Lee Academy where he and his wife spent most of their free time. To sum up his life, he was faithful to God, his family and his many friends always sharing the love of the Lord. HE DIED AS HE LIVED, A CHRISTIAN. Funeral services will be held at St. Andrew Church of God, 4238 Red Hill Road, Bishopville on Sunday, October 30, 2016 at 3:00. Rev. Larry Mobley will officiate with burial to follow in the church cemetery. The family will receive friends on October 29, 2016 from 5:00 to 7:00 p.m. at Hancock-Elmore Hill funeral home in Bishopville. Memorials may be made to Wilbur McLeod Memorial fund c/o NBSC. Online condolences can be given at www.hehfunerals.com.

Wilbur Devern McLeod, 83, loving husband of Judy Brown McLeod went to Heaven on October 24, 2016 after a short battle with cancer. The son of Myrtle and Herbert McLeod of Sumter, he was the father of Laurice (Eddie) Prince of Sumter, Kaye (Jim)... View Obituary & Service Information

The family of Mr. Wilbur Devern McLeod created this Life Tributes page to make it easy to share your memories.

Send flowers to the McLeod family.