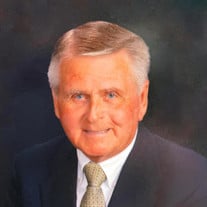 A graveside funeral service for Mr. William "Bill" Elvin Hopkins, Sr., 78, who entered into rest on Saturday, January 9, 2021, will be held at 1 o'clock on Wednesday, January 13, 2021, at Cedar Creek Baptist Church Cemetery. The Rev. Dr. James Jordan will officiate the graveside service. In light of the recent pandemic, the family kindly asks that masks be worn for all guests attending. Hancock-Elmore-Hill Funeral Directors are caring for the family. Guests are invited to pay their respects and sign the register at the funeral home on Tuesday during regular hours and Wednesday morning. The service will be live-streamed on Facebook for those unable to attend. Remembrances may be made in the form of flowers, contributions to First Baptist Church of Bishopville, or contributions to St. Christopher’s Children, Inc. Bill, or Billy as he was known in his youth, was born June 27, 1942. Bill was the first of four children of the late Elvin McClure Hopkins and Ruth Outlaw Hopkins. Bill grew up in the Cedar Creek community and began working in his grandfather Eugene Hopkins’ general store before he was 10. After graduating from Bishopville High School in 1960, he went to work at a furniture plant in Sumter. Bill married his high school sweetheart, Annette Logan, on July 2, 1961. After taking some engineering classes at Clemson University, Bill began a career as an Industrial Engineer working in the furniture and textile industries. He held several engineering positions at various plants throughout the Southeast, but Bill ultimately returned to his hometown of Bishopville where he started and owned a cut-and-sew operation. This business was recognized by Governor David Beasley as one of South Carolina’s Top 100 Job Creators in 1994. In 2008 Bill was recognized by Governor Mark Sanford as an Ambassador for South Carolina Economic Development. Bill ultimately went to work at Rexam, now Ardagh, where he formed several of his closest friendships and ultimately retired. Bill loved golf and was one of the most popular regulars at the Bishopville Country Club. Bill had a competitive streak and loved few things more than a Saturday afternoon at the golf course with his buddies giving and receiving some good-natured barbs and ribbing. The one thing he did love more than golf was family, and it was in this arena in which he excelled, and his light shone the brightest. He was a loving and devoted husband, selfless father, and superbly generous and proud grandfather. His grandchildren adored him, as did most children in his extended family. He was a surrogate father to a number of people. Kindness, generosity, empathy, understanding, compassion, and grace were his hallmarks. Listening was his specialty. Friendship was his mission. Bill was a member of the First Baptist Church of Bishopville. Surviving are his wife Annette, daughter Terri Camp of Cayce, SC; son Bill Hopkins, Jr. (Rachel) of Pawleys Island, SC; granddaughter, Jordan Hopkins of Mt. Pleasant, SC; grandsons, William Camp of Cayce, SC, Clay Hopkins of Johns Island, SC and Jack Hopkins of Pawleys Island, SC; sisters, Alene Sims of Turbeville, SC and Alice Jean Moseley of Camden, SC; brother Michael Hopkins (Miranda) of Fort Mill, SC; and many nieces and nephews. Bill was predeceased by his parents. Serving as pallbearers will be Clay Hopkins, Will Camp, Jack Hopkins, Dekle Logan, Crues Bell, Wayne Capell, Wayne Elstrom and Tim Dawkins. A live stream of the funeral service may be viewed at www.facebook.com/hehfunerals

The family of Mr. William "Bill" Elvin Hopkins Sr. created this Life Tributes page to make it easy to share your memories.

Send flowers to the Hopkins family.