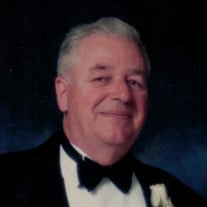 William Howard Meldrum, Jr. died on Thursday, March 10, 2005, of a heart attack. He was sixty-nine years old and had lived in Powder Springs, Georgia, since 1971. Bill was born in Buffalo, New York, on January 30, 1936, the only child of William Howard Meldrum, Sr. and Jeanette Augusta Hall Meldrum. He graduated from Furman University in Greenville, South Carolina, with a degree in Accounting. He met Virginia Hearon at Furman, and they married on September 15, 1957, at Bishopville Presbyterian Church. Bill began his career in corporate accounting at Shell Oil and Avon and served as director of finance at Six Flags over Georgia. He launched his private practice, Meldrum’s Accounting Service, in 1971 and served Powder Springs and the surrounding community with bookkeeping and tax services for over three decades. He earned his designation as a Certified Public Accountant, and in 1984, helped his wife, Virginia, purchase and restore the historic Cooper-Lindley House in Powder Springs. Together, they opened the Owl’s Tree Bookstore and Meldrum’s Accounting and worked side-by-side for twenty-one years. Bill served eleven years in the Army Reserve, commissioned June 2, 1957, promoted to captain in 1964, and honorably discharged on May 5, 1968. He was a long-time member of the First Church of Christ Scientist in Marietta, Georgia, and active in the Cobb Republican Party. He was survived in 2005 by Virginia, his wife of forty-nine years, and their children William Howard Meldrum III of Pendleton, South Carolina; Robert Wade Meldrum of Marietta, Georgia; Virginia Anne Meldrum Galloway of Hiram, Georgia, and Elizabeth Hearon Meldrum Morrell of Powder Springs, Georgia, ten grandchildren, and one great-grandchild. A memorial service was held on Sunday, March 13, 2005, at 3:00 p.m., at Austell Presbyterian Church. Following his wife Virginia’s death in February 2021, a joint graveside service for the interment of their ashes will be held at 1 o'clock on Saturday, May 1, 2021, at Bishopville Presbyterian Church. Hancock-Elmore-Hill Funeral Directors of Bishopville, South Carolina, are caring for the family.

William Howard Meldrum, Jr. died on Thursday, March 10, 2005, of a heart attack. He was sixty-nine years old and had lived in Powder Springs, Georgia, since 1971. Bill was born in Buffalo, New York, on January 30, 1936, the only child of William... View Obituary & Service Information

The family of Capt. William Howard Meldrum Jr. created this Life Tributes page to make it easy to share your memories.

Send flowers to the Meldrum family.