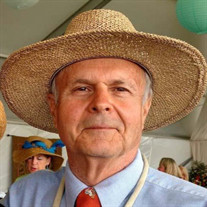 A graveside funeral service for Mr. William Leslie Kean Scott, Jr., 71, who entered into rest on Thursday, October 8, 2020, will be held at 11 o'clock on Saturday, October 10, 2020, in Mt. Zion Presbyterian Church Cemetery. The Rev. James Clark will officiate, and Hancock-Elmore-Hill Funeral Directors are caring for the family. Expressions of condolences may be made in the form of donations to Mt. Zion Cemetery Trust, c/o Don Mathis, 145 Cooper's Mill Road, Bishopville, SC 29010. Born in Florence, SC, he was the eldest son of the late William Leslie Kean Scott and Rebecca Lesesne Scott. He was a licensed Professional Engineer, a member of Mt. Zion Presbyterian Church, and took pride in caretaking his family's farm. He enjoyed caring for his horses and went horseback riding regularly with a group of close friends and neighbors. After graduating from the Citadel, he served in the Air Force in the Vietnam Era. Later he returned to Charleston, SC, and started his engineering career working with the City of Charleston and eventually ended up working for the Charleston Naval Shipyard, where he assisted in repairing and refitting all types of Navy ships. When the shipyard was shut down, he returned home to Mayesville, SC, to farm and to raise his family. He later returned to engineering by teaching at the Central Carolina Technical College in Sumter, SC, a life which he enjoyed by aiding many students in their lives. He later left teaching and took a job with the South Carolina Department of Transportation as a field engineer and enjoyed every minute of it until his retirement. He was an engineer through and through. Preceded in death by his brother, John Sloan Scott, he is survived by his wife, Carole Bunton Scott, sons, William Leslie Kean Scott III, Thomas Zachary Scott of Columbia, SC, and nephews John Sloan Scott Jr. of Aiken, SC, and Phillip Kennedy (Amber) Scott of Seneca, SC.

The family of Mr. William Leslie Kean Scott Jr. created this Life Tributes page to make it easy to share your memories.

Send flowers to the Scott family.