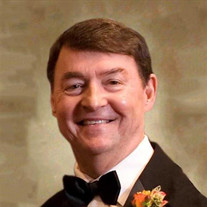 Dr. William Albert Webster IV (Billy), 71, of Greenville, SC went to be with the Lord on Monday, October 1. He was born on February 15, 1947, in Lake City, SC. He is survived by his loving wife of 47 years, Maree Fann Webster, and sons: Rev. Brent (Katie) Webster of Oakland, CA and Park (Briana) Webster of Greenville, SC. Also, surviving is his twin sister, Laura Brown (Grady) of Bishopville, SC. He was the beloved grandfather of William, Lucy, Rosie, Parker, and Grace. He is preceded in death by his loving parents, William A. Webster III, and Jessie Mae Boyd Webster, as well as his beloved sister, Patsy Matthews (Charles). Dr. Webster loved his South Carolina roots and was a proud graduate of The Citadel. After earning his doctorate at Florida State, Dr. Webster and family settled in Greenville, where he established South Carolina’s first comprehensive cardiac rehabilitation program, known as HeartLife. He served faithfully with the Greenville Hospital System for 30 years. During that time, he became Chairman of the South Carolina Governor’s Council on Physical Fitness and a Fellow of the American College of Sports Medicine. Above all his many prestigious accomplishments, his greatest love was his patients. In retirement, Dr. Webster continued his passion for running and spending time with his beloved wife and grandchildren. He maintained a connection with The Citadel and visited as often as possible. Dr. Webster was a strong Christian, loving husband, a tremendous father, and grandfather, and a dedicated educator whose enthusiasm for health touched so many lives. He will be deeply missed, but would likely encourage all of us to exercise our hearts, by showing love to others and daily physical activity. He fought a courageous battle with Alzheimer’s with strength, dignity, and faith, surrounded by his wife Maree, children, and grandchildren. The family will receive friends at Mackey Funeral Home, Greenville, SC, on Saturday, October 6, 2018, from 12:00 - 2:00 pm. A memorial service will be held Sunday, October 7, 2018, at Mitchell Road Presbyterian Church at 2 p.m. In lieu of flowers, the family requests that donations be made to Resurrection Church, a church in Oakland, CA recently started by his son, Brent. Donations may be mailed to Resurrection Oakland, 4123 Broadway #816, Oakland, CA 94611. You can read more about Resurrection Oakland at resoakland.com.

Dr. William Albert Webster IV (Billy), 71, of Greenville, SC went to be with the Lord on Monday, October 1. He was born on February 15, 1947, in Lake City, SC. He is survived by his loving wife of 47 years, Maree Fann Webster, and sons: Rev.... View Obituary & Service Information

The family of Dr. William Albert Webster IV created this Life Tributes page to make it easy to share your memories.

Send flowers to the Webster family.