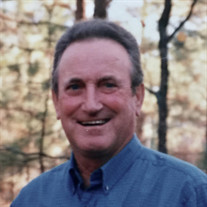 Willis Josey Woodham, the beloved husband of the late Polly Hill Woodham, went to his heavenly home on March 2, 2021, passing in Spartanburg. He was born at home in Stokes Bridge, SC, a small farming community in Lee County, to Alva Leslie Woodham and Mattie Vera Chappell. He was a graduate of Bishopville High School and Wofford College (1951). It was there that he met the love and light of his life, Polly Hill, who predeceased him on April 3, 2019. They married in September of 1951 and enjoyed 68 years together. After he graduated from Wofford, he worked as a fourth-generation family farmer growing cotton, oats, and soybeans. He was a collector of things and friends. He never met a stranger and would often query with questions if he thought someone might be kin to someone he knew. He was a jokester who loved a good story, good friends, and good home-grown vegetables, especially Mortgage Lifter tomatoes. He was a life-long member of Bethlehem United Methodist Church and belonged to American Legion Post 29. He and Polly were active in the American Agriculture Movement. He was an avid tennis player and supported all his children’s and grandchildren’s athletic endeavors by attending many games, horse shows, and competitions. He was honored by the American Legion for his support of veterans. Mr. Woodham was a fantastic athlete in high school and college. He received many honors and awards while at Wofford. He was in Who’s Who, Senior Order of the Gnomes, Blue Key, and served as #4 and #1 for Kappa Alpha Order (fraternity). He served on the inter-fraternity council and was president of his sophomore and senior class. He was in ROTC, was a member of the honor society Scabbard and Blade, and was Captain and company commander of Company B. Mr. Woodham was in Pi Gamma and Sigma Delta Psi (exclusive athletic fraternity), a member of the Block W Club, and served as treasurer. He maintained his grades and was on Honor Roll while at Wofford. In addition to all he accomplished both on and off the field and in academics, he worked in the dining hall as a waiter to help pay his way through college. Mr. Woodham ran inter-collegiate track for Wofford and was MVP track athlete his junior and senior years. He won the state track championship in the 220-low hurdles for three consecutive years (1949-1951). He tied first in the high jump (5’ 11/2”) at the state meet in 1950. He won a variety of races at meets during the regular season the years he competed for Wofford. Mr. Woodham served as co-captain of the track team in 1951. Coach Clayton Stapleton with Wofford football was quoted in a 1951 article in The Spartanburg Herald-Journal saying, “He’s the best all-around athlete at Wofford and one of the finest boys you’ll find anywhere in the country.” Mr. Woodham earned more than honors at Wofford College. He gained life-long friends, a strong academic preparation for life, and the pride of being a Wofford Terrier. Mr. Woodham was also predeceased by his son, Willis Josey Woodham Jr.; his parents Alva and Vera Woodham; a sister, Margery Woodham Jeffords; a brother, Alva (Tunky) Woodham Jr. He leaves behind his loving daughters: Martha Adger Woodham, Susan Chappell Woodham, Mary Woodham Randall (Tom), Margaret Katherine Woodham (Steve Wong) and Katherine Woodham (Jerry Laney) and seven grandchildren: Harrison Woodham White (Will), Wesley Woodham Randall, Adam Leslie Woodham Wong, Willis Josey Woodham III (Stephanie), Allyn Woodham Wong, Margaret Randall Bagwell (Curt), and Conner Farley Woodham, and also sister-in-law, Harriet Woodham, and brother-in-law, Gabe Hill III. A graveside service with military honors will be held at 2 o'clock on Saturday, March 6, 2021, in Bethlehem United Methodist Church Cemetery, 110 Pinchum Sly Road, Bishopville, SC. The Rev. Fran Connell and The Rev. Fred McDaniel will officiate, and the family will receive friends immediately following the service. In lieu of flowers, please make contributions to Bethlehem United Methodist Church (PO Box 167, Bishopville, SC 29010) or Lee Academy (630 Cousar Street, Bishopville, SC 29010). Hancock-Elmore-Hill Funeral Directors are caring for the family. Serving as pallbearers will be Wesley Randall, Adam Wong, Will Woodham, Conner Woodham, Will White, and Curt Bagwell. COVID protocols will be followed.

Willis Josey Woodham, the beloved husband of the late Polly Hill Woodham, went to his heavenly home on March 2, 2021, passing in Spartanburg. He was born at home in Stokes Bridge, SC, a small farming community in Lee County, to Alva Leslie Woodham... View Obituary & Service Information

The family of Mr. Willis Josey Woodham created this Life Tributes page to make it easy to share your memories.

Send flowers to the Woodham family.